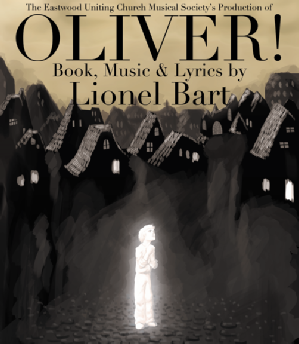 The curtain opens on the sinister interior of the workhouse with a bare dining table. Pale-faced wretches can be seen peering through the bars of the door at the back. The door opens and the boys file in to the table singing "Food, Glorious Food". Widow Corney, who runs the workhouse, and Mr Bumble, the parish beadle, enter to serve gruel to the boys. Alone amongst them Oliver takes the bowl to Bumble and asks, "Please, Sir, I want some more." Bumble is outraged. Oliver must go and so he hawks Oliver through the streets of London singing "Boy For Sale." Oliver is sold to Mr Sowerberry, the undertaker. Alone, plaintive and surrounded by coffins, Oliver sings, "Where Is Love?"

He runs away and meets the Artful Dodger who sings "Consider Yourself At Home". Oliver is taken to a hideout to meet Fagin and the apprentice thieves - they welcome Oliver with "You've Got To Pick a Pocket Or Two". Nancy, Bill Sykes girl, and Bet arrive and sing "It's A Fine Life". Next morning Oliver goes with the boys and is arrested by the police, not for picking pockets but simply for looking guilty.

In Act 2 Nancy sings "Oom-pah-pah". Fagin's boys tell of Oliver's arrest by the police but that, as he has been found to be innocent, he is now safe in the house of a kindly, rich gentleman. Fagin and Sykes despatch Nancy to get Oliver back. Meanwhile, Oliver has become a well-cared for little lad. Seeing London street-traders from his bedroom window he sings "Who Will Buy?", a plea that his good fortune will become permanent. However, outside the house he is captured by Nancy and she returns him to Fagin. Fagin sings "Reviewing the Situation" and thinks of going straight.

Bumble and Mrs Corney, now married, discover that Oliver is the heir to a rich family and try to get him back. A regretful Nancy plans to return Oliver to his benefactor. She is fearful of Sykes yet sings, "As Long As He Needs Me". Sykes stalks and kills her, grabs Oliver and, after a chase, is shot dead. Oliver is restored to his benefactor who, as it turns out, is his own grandfather. Fagin, now minus the boys, home and money, reprises "Reviewing the Situation".