On the Willows: Lynn Bock, Cathy Bulfin and Joshua Woodward

We performed Stephen’s re-worked 2012 version of the GODSPELL score. You can hear it on YouTube here.

John-Michael Tebelak studied theatre directing in the mid-1960s. While looking for material for his Masters thesis project, he read the four gospels of Matthew, Mark, Luke and John (ancient biographies of Jesus, found in the Bible) and, in his own words, “I became terribly excited because I found what I wanted to portray on stage…. Joy!  I found a great joy, a simplicity – some rather comforting words in the Gospel itself – in these four books.”

For further research, John-Michael attended a Church service but was frustrated to find it somber and serious. This further convinced him that he wanted to create a show that celebrated “the simple, joyful message that I felt the first time I read [the Gospels].”

This show came to be known as “Godspell” (an Old English word meaning “good news”) – a truly joyful musical that takes many of the liturgical elements of a traditional Church service (hymns, Scripture readings, teachings and even sacraments) and re-presents them in new and surprising ways. John-Michael and his cast of actors used improvisation to find new ways to retell Jesus’ stories and teachings. As a result, the show is not built on a traditional plot, but rather focuses on Jesus and a small group of followers who share and enact stories/parables and lessons. The words spoken are primarily directly from the Gospels (particularly Matthew and Luke) but they are enacted using a range of theatrical styles, storytelling techniques, games and much comedy. In the second act the show begins to follow a more linear narrative as Jesus is betrayed, crucified and resurrected.

Godspell is a surprising show. It is unconventional in its structure; its setting varies from production to production; its songs use the lyrics of traditional hymns and ancient Christian writings, and these are set to music that encompasses rock, folk, gospel, Broadway and jazz.

Audiences are often surprised to find themselves laughing so much during a show that has content that many would describe as “religious”. Perhaps this is (at least in part) because we don’t realise or remember just how surprising Jesus was and is – surprising in what he taught, what he did, who he said he was and what he said he was going to do.

Jesus was and is (among many other things) a radical. His teachings, actions and claims drew both crowds and condemnation. People from all walks of life followed him and had their whole lives changed. Others condemned and persecuted him.

Perhaps over-familiarity has robbed us of a true appreciation of Jesus’ teachings. Phrases such as “good Samaritan”, “turning the other cheek” and “going the extra mile” have entered our vocabulary without really entering our hearts. Perhaps some of us have heard the stories of Jesus so often that we have lost our sense of wonder that a Father would watch for and welcome the wayward son who had shamed him; and that a loving God would likewise show outrageous love and forgiveness to those who have rejected him. We often forget that Jesus’ message is about God offering mercy and forgiveness rather than demanding that we keep rules.

Perhaps for others the distance of time and culture makes the stories seem distant or impersonal. Jesus Christ “turned up” in an obscure village, in a country on the other side of the world more than 2000 years ago. But what if he turned up at a different time and place instead? What if he appeared on a railway station concourse in an obscure suburb in this country, this week? And what if you were there? What would you do? Would you stop to listen? Would you recognise his teaching as something out of the ordinary – personally life-altering, history-shaping, world-changing? Would you let him interrupt the regular pattern of your daily routine? Or would you continue on to your train or rush to your deadline? Would you put-off listening, thinking he would be there another time when it would suit you better? If his words spoke to your heart, would you choose to follow, or would you dismiss them or condemn him?

What if Jesus’ words speak to you today?

I hope that Godspell shows you something new and surprising about Jesus. And after the show, why not pick up the Bible and be surprised by Jesus – for the first time, or once again. 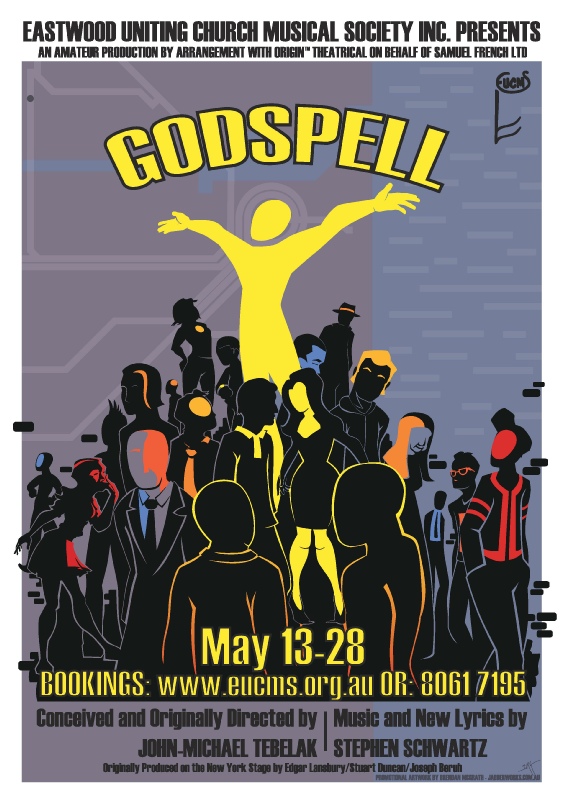